How To Talk About Healthy Weight With Your Daughter 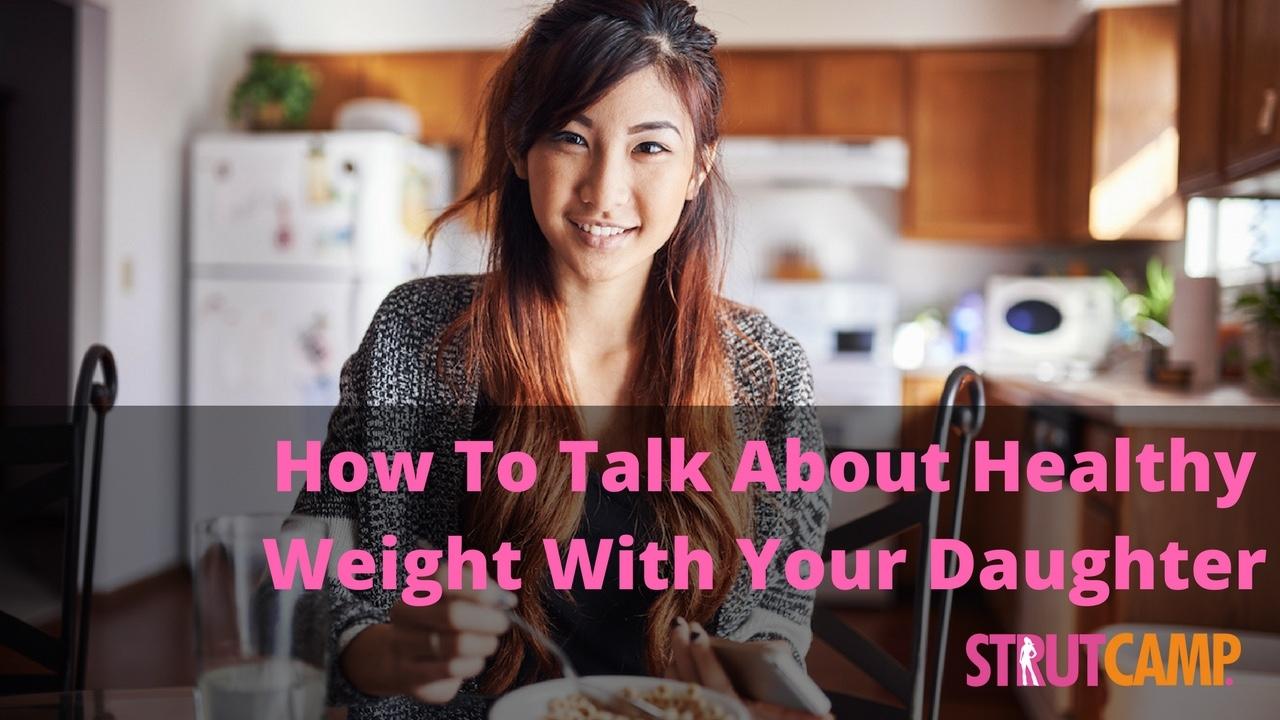 Teenage girls often have a love-hate relationship with their body's and it can leave parents feeling unsure about how to broach the subject of a healthy weight.

You want to teach her the importance of eating well. The dangers of poor nutrition and obesity are real and can have a dramatic impact on her wellness. But how can you communicate the ‘healthy eating’ message, without triggering body consciousness?

Let’s face it. Most teenage girls are hyper aware of their bodies, without needing additional pressure from home.

Pressure To Fit In

Body consciousness is running rife across the Western world, so it is no wonder that most teenage girls struggle with this issue. Pressure to look a certain way comes from that common nemesis… society.

The media shares images of unrealistic female figures. Technology allows photos to be tweaked to non-human standards and the celebrity craze adds further fuel to this fire.

Typical role models are rich and famous thanks to their tiny waistlines and apparent ability to abstain from food.

Couple this with the incessant advertisements for junk food that have plagued your daughter’s life since she was a toddler. Times have changed and relationships with food are becoming more complex than ever.

Even peer groups are not immune from the pressures. It is typical for most girls to spend hours chatting about their weight, appearance and diet.

Comparison is the thief of joy - Theodore Roosevelt

In a study published by Anne Becker, young women in Fiji were interviewed 3 years after TV was first broadcast in their home region. The aim was to determine whether the TV had any impact on their eating habits and body satisfaction. The following is an excerpt from the abstract.

Data in this sample suggest that media imagery is used in both creative and destructive ways by adolescent Fijian girls to navigate opportunities and conflicts posed by the rapidly changing social environment. Study respondents indicated their explicit modeling of the perceived positive attributes of characters presented in television dramas, but also the beginnings of weight and body shape preoccupation, purging behavior to control weight, and body disparagement. Understanding vulnerability to images and values imported with media will be critical to preventing disordered eating and, potentially, other youth risk behaviors in this population, as well as other populations at risk.

It is a clear indication of how quickly damage can be done to the self-esteem of young women.

In an interesting preliminary study by Ashikali et al, investigators compared levels of body dissatisfaction in visually impaired and sighted women. The following excerpt shows that sighted women, who have been exposed to media, have an increased desire for unrealistically thin body ideals.

This study investigated body dissatisfaction, restrained eating, and attitudes toward appearance in visually impaired and sighted women. There were 21 congenitally blind, 11 blinded later in life, and 60 sighted. Blind women were more satisfied with their body and dieted less than sighted women. Appearance attitudes, particularly thin-ideal internalization, accounted for differences in body dissatisfaction and dieting among the three groups of women.

These findings come as little surprise and, unfortunately, you can do little to prevent the impact that the media has on the young women in our lives.

So What Can You Do?

It might feel as though this is a subject best left untouched, but it's important to deliver the healthy eating message clearly and effectively. After all, she is still developing, and habits learned now will serve her for years to come.

Why not try some of these suggestions:

Share active time as a family. You can go hiking, swimming, play sports or even challenge one another competitively. Take the focus off of weight altogether. Don’t frame it as exercise. Just get up off the couch and spend quality time moving your bodies.

Be wary of restricting any food from your family’s table. Instead, why not make sure you provide healthy meals and snacks the majority of the time. Don’t fill your cupboards with processed foods, but don’t create unhealthy desires by forbidding food.

Moderation is the key!

One of the reasons that so many adults have developed an unhealthy relationship with food, is the labels that they use to categorise it. Calling foods good and bad, or healthy and unhealthy, gives the whole thing too much focus.

It can cause obsessions, restrictions, binging and guilt cycles that can take years to break.

Try describing food as processed and unprocessed, and make it your goal to provide as much unprocessed foods as you can during meals.

We are all born with a satiety sensor, which tells us when we have eaten enough - allow your daughter to listen to that. Don’t force her to finish her meal and clear her plate. This can be a tricky habit for parents to break, but you must encourage her to listen to her body.

Important caveat - be aware of tactics to avoid eating. Eating disorders is an important subject that will be tackled in a separate post.

In a previous post we mentioned the that teens sometimes actively resist what their parents suggest, even if they had wanted to follow that direction themselves. So this bullet point is a reminder to not make ‘eating’ and ‘weight management’ into a power struggle. The need to be independent can override any common sense about what is healthy.

A study published by Kelly et al showed that parents really can have a positive impact on the body satisfaction of their daughters. However, if you have any concerns about your daughter’s weight, or suspect an eating disorder, be sure to take her to a qualified medical practitioner.

Parents and health care providers often struggle with how to address the topic of weight management in teens without causing further injury to body image. Findings from the present study suggest the importance of providing a social environment that focuses on health and fitness, rather than on weight control, to increase adolescent girls' likelihood of being satisfied with their bodies. As we have suggested, the focus should be on health and fitness, with the goal being to build a healthy relationship with food and activity.

With the right habits in place now, she will be free to Strut through life healthily for years to come!